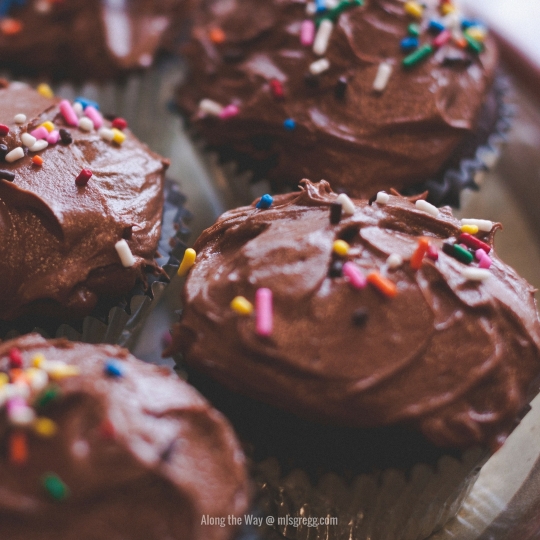 And it’s stupid hot outside, so I’m hiding in the house, next to the air conditioner, shades drawn. There’s a small rectangle between the top of the couch and the bottom of the blinds that allows me to peek out on a scorching, quiet world. Nobody is out-and-about. The rose bushes climbing up the trellis look a little sad. The dogs alternate between panting and snoozing.

I feel kind of sorry for making my mom go into labor during such a miserable time of year (as if I had any control over that). I was supposed to show up at the end of the month or even in early September. But I was in a rush, three weeks early. Bald-headed and a little over five pounds. My dad tells me that I came into the world with my eyes wide open, which I like to think was a sign of the curiosity and hunger for understanding that remains with me.

I’ve reached yet another transitional season of adulthood. I’m not young and stupid, but I’m also not old and wise. I know enough to know better, but not enough to always foresee the oncoming bend in the road. People begin to seek my advice on serious issues like faith and relationships, which is completely frightening. Most scary of all, I’m old enough to have been married long enough to start being looked upon as an example for other, younger wives.

I can’t help but take that seriously.

Today I wonder what kind of advice I can really offer to anyone. The better part of wisdom is knowing just how much you don’t know. Despite all my reading, all my studying – I know very little. But perhaps it’s not about the quantity of knowledge, but rather the quality of knowledge.

With that in mind, I move to pondering what I might wish to say if this were my last birthday. Yeah, yeah. Some of you find that morbid. Hike up your big kid britches. We’re all going to shed this leaky tent; some of us are forced to face that fact sooner than we’d prefer. I am painfully aware on a daily basis that this skin-suit is going to stop working one day. I have no delusions of immortality, none that are beyond the life eternal promised in Christ Jesus.

On this day, then, I want to leave you with some of the truest words I know, the best pieces of wisdom that will light the way through any darkness:

…what more shall I say? For the time would fail me to tell of Gideon and Barak and Samson and Jephthah, also of David and Samuel and the prophets: who through faith subdued kingdoms, worked righteousness, obtained promises, stopped the mouths of lions, quenched the violence of fire, escaped the edge of the sword, out of weakness were made strong, became valiant in battle, turned to flight the armies of the aliens. Women received their dead raised to life again.

Others were tortured, not accepting deliverance, that they might obtain a better resurrection. Still others had trial of mockings and scourgings, yes, and of chains and imprisonment. They were stoned, they were sawn in two, were tempted, were slain with the sword. They wandered about in sheepskins and goatskins, being destitute, afflicted, tormented— of whom the world was not worthy. They wandered in deserts and mountains, in dens and caves of the earth.

And all these, having obtained a good testimony through faith, did not receive the promise, God having provided something better for us, that they should not be made perfect apart from us.

Therefore we also, since we are surrounded by so great a cloud of witnesses, let us lay aside every weight, and the sin which so easily ensnares us, and let us run with endurance the race that is set before us, looking unto Jesus, the author and finisher of our faith, who for the joy that was set before Him endured the cross, despising the shame, and has sat down at the right hand of the throne of God.

For consider Him who endured such hostility from sinners against Himself, lest you become weary and discouraged in your souls. …

Now godliness with contentment is great gain. For we brought nothing into this world, and it is certain we can carry nothing out. And having food and clothing, with these we shall be content. But those who desire to be rich fall into temptation and a snare, and into many foolish and harmful lusts which drown men in destruction and perdition. For the love of money is a root of all kinds of evil, for which some have strayed from the faith in their greediness, and pierced themselves through with many sorrows.

How can a young man cleanse his way?

By taking heed according to Your word.

With my whole heart I have sought You;

Oh, let me not wander from Your commandments!

Your word I have hidden in my heart,

Blessed are You, O Lord!

Teach me Your statutes.

With my lips I have declared

All the judgments of Your mouth.

I have rejoiced in the way of Your testimonies,

As much as in all riches.

I will meditate on Your precepts,

And contemplate Your ways.

I will delight myself in Your statutes;

I will not forget Your word. …

For I am already being poured out as a drink offering, and the time of my departure is at hand. I have fought the good fight, I have finished the race, I have kept the faith. Finally, there is laid up for me the crown of righteousness, which the Lord, the righteous Judge, will give to me on that Day, and not to me only but also to all who have loved His appearing. …

Look to Jesus. Cry out to Jesus. Follow Jesus. Rest in Jesus.

Now, instead of singing happy birthday to me, go and sing to Him.

Linking up with Suzanne Eller, Holley Gerth and  Susan Mead.

21 thoughts on “They Say It’s My Birthday”