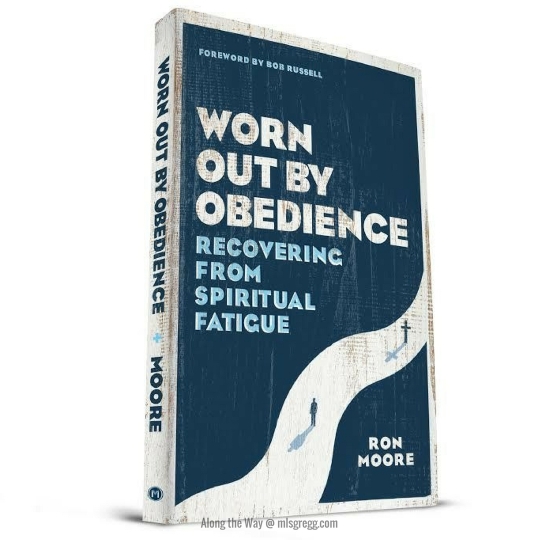 These are all states with which I am intimately familiar – physically, mentally, emotionally, spiritually. I know what it is to drain the tank to the very last drop and wonder how or why I should keep on the path that God has laid out for me. Wouldn’t it be easier to take a detour? To check out for awhile? In the name of self-care, isn’t it all right to indulge myself?

The shepherd-warrior David felt that, too. After years on the run from King Saul, he gave up on seeking God’s will for a season. Oh, he didn’t hate God. He just sort of put God on the back burner. David took his men into enemy territory, to Ziklag, because he was tired. And that tiredness led him to believe that God wouldn’t take care of him.

Pastor Ron Moore uses this biblical story to show us how easy it is to wind up in our own personal Ziklags. We never intend to go there. We want to do the right things. Except…sometimes we don’t. We hold on to secret, precious sins. Or maybe it’s not that, maybe it’s just that we’re trying to do all the right and good things in our own strength. Eventually, that strength runs out.

Moore’s years of pastoral work is evident on every page. He relates stories of men and women who turned aside from God for a time, as little as a few days or as long as many years. Some of them wound up in Ziklag because they didn’t want to give up sin – but they were still able to put on a good religious show. Others bought ground there out of burn-out, the kind that comes from never being able to say “no” to all the good things that need doing.

This would be enough, but Moore goes a step further and shares his own struggles, never denying his own humanity. This allows the reader to explore the discussion questions at the end of each chapter in safety and vulnerability, knowing that the author isn’t out to condemn from the confines of a hypocritical tower.

Divided into three parts, Worn Out by Obedience begins by describing the ways in which we become exhausted. Are we asking God to order our days? Are we holding onto things we need to get rid of? Are we trying to earn His grace by our good deeds? Whether we are worn out by service, expectations, disappointment or sin, we risk giving in to the temptation to listen to our own advice and pack our bags, as outlined in the second part. Finally, Moore reminds us of the grace of God that enables us to get out of Ziklag and get back on His path.

Though I cannot reproduce it here and am reduced to mere description, the graphic on page 22 provides a nice summation. The Christian experience is one of hill and valleys, ecstasy and agony. At the same time, it is one of overall progress is upward, toward Christ. The pits and the progress coexist. And so, as Moore writes,

When the reality of soul weariness is ignored, we slowly slide into dangerous time of spiritual disconnectedness, disappointment and discouragement. It is during these vulnerable stretches when we are most susceptible to suspend the battle against temptation, lay down our armor and surrender to sin. As a lion goes after worn-down prey, so Satan charges after the tired believer. We have to recognize the reality of spiritual fatigue, understand the danger and takes the steps of refresh our soul.

The rest of the book explains how to identify weariness and how to address it in order to avoid Ziklag. However, if Ziklag is where we are, there is always grace to leave.

As this is a book from Moody Publishers, there are a few sections that are heavy on the Calvinism, but this doesn’t effect the overall message of the book. One paragraph did, however, stand out to me:

I became a Christian when I was around twelve years old, and my family was very involved in our small church. The fellowship was meaningful. The worship was uplifting. The messages were based on the Bible and applicable. But there were challenges with the church’s doctrine. I was taught that Christian could lose their salvation, that an act of sin severed one’s relationship with God. I grew up believing that I could be headed for [H]eaven in the morning, then sin at lunch and be on my way to [H]ell by the afternoon.

As Moore does not name this church, it is impossible for me to know if he was taught an incorrect doctrine of assurance or if he misunderstood the Arminianism the church espoused. If the former, if he really was taught that one sin meant he had to be somehow saved again, then there were definite problems with the church’s doctrine. That would inspire terror and legalism. If the latter, he would not be the first to misunderstand the Arminian teaching on assurance and apostasy. The Society of Evangelical Arminians addresses this directly:

As this comes up in the penultimate chapter, and Moore does not spill significant ink in trying to convince his audience of Calvinism or in attacking those who do not find TULIPs lovely (neither of which is the point of the book), it is only a minor detail and one that a casual reader may not even notice. The mindful non-Calvinist need not fear being blindsided or belittled, not should he fear manipulation.

I recommend Worn Out by Obedience to anyone who wishes to avoid burn-out and wandering off of God’s path, but especially recommend it to those who, like myself, have strayed more often than they would like to admit. The struggle is real. The climb is steep. There may be miles to go in order to get back on course. But there is more than enough grace to save us, more than enough love to console us and more than enough Spirit to empower us.

I received a free copy of this book in exchange for my fair and honest review.