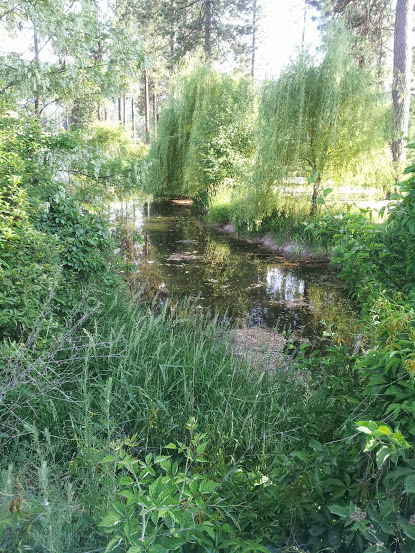 I took this picture as Chris and I walked through the park tonight. The interplay of light and shadow, of textures, of shades of green took my breath away. The pond was still, the crickets chirping in glorious symphony.

Unfortunately, so is the Devil.

Last night I went back for my first shift at the shelter after being away for six weeks. In the short amount of time I’ve been volunteering, I’ve seen big things go down in the space of 30 minutes, so I suppose I should have expected to encounter a lot of changes. But I didn’t. Whether it was naivety or hope, I don’t know. Maybe a little of both. I wanted to come back and find that everyone was as they were when I left, plugging away at the program, making progress.

Sadly, that wasn’t the reality. For obvious reasons I won’t go into details here, but as my fellow volunteer caught me up on all the goings-on, I was reminded that the Devil is real. Yes, we make our own choices. Nobody forces us into sin. We are responsible before God for what we say, do, think and feel. At the same time, there is a very real Enemy, one who seeks to capitalize on our weaknesses. He is indeed a defeated foe, but he’s going to take down as many with him as possible before the culmination of this age.

So, I’m going to be blunt: If you call yourself a Christian but don’t acknowledge the reality of Satan, you are blind. Deceived. Evil is real and it is personified. No, he is not God’s equal, but he’s real and he has a plan. He seeks to counterfeit everything that God does in his quest to “be like the Most High” (Isaiah 14:14). He sells a “gospel,” only there’s nothing good about his news. The seemingly-pretty temptations that he dangles in front of us lead only to death and destruction; he seeks to steal everything good from us (John 10:10).

If you don’t believe me, then get out there among people. They are dying by the tens, even hundreds, of thousands, caught in his clutches. Spend some time in a homeless shelter and then tell me that the Devil doesn’t exist. Every abuse or addiction echoes with the ring of his gleeful laughter. He screams lies, doing all he can to drown out the Voice of truth.

We who know the Lord need to step up and intercede. I don’t know all the ins and outs of spiritual warfare. I just know that God hears the prayers of the righteous (James 5:6) and that all who are in Christ are declared righteous (Romans 3:21-26). We need to pray for a world lost in darkness, a world whose ears are tuned to deception. We need to ask that God would open hearts and minds, just as He did for us. And we need to pray that those who hear the truth would choose the truth.

My heart aches tonight for precious women who have snuggled up with Satan. They probably don’t know they have. They’ve been enticed by a velvet touch only to find themselves choking in a claw of iron. I beg God to have mercy on them, to give them an opportunity of escape. I pray they take that escape. I pray they turn to the One who is really real, the only One who can and will fill the hole in their souls.