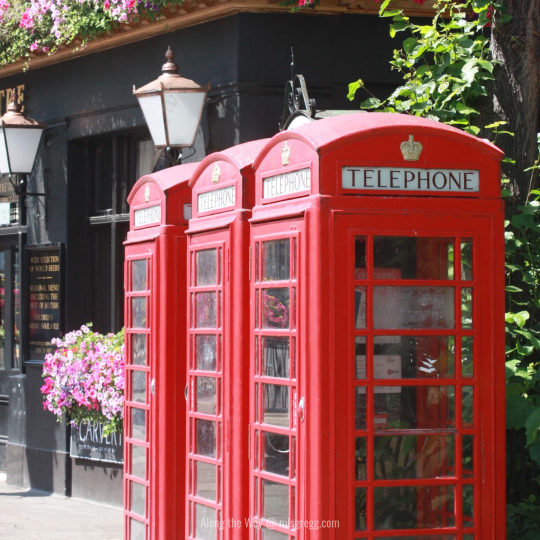 It’s been a busy two days! I’d made it my plan originally to blog each night, because I want to be able to remember everything, but we didn’t get in after Les Miserables last night until after 11, and then had to run out to Cinnabon up the street for a much-needed snack.

Yesterday the fun of this started to sink in. The 6 a.m. wake-up call sucked, but I’m glad we got up and going. Feeling a little more comfortable with the tube helped us to feel adventurous enough to go out to Westminster Abbey. We came out of the tunnel and were immediately greeted by the Thames River and the London Eye opposite our spot. The Thames is not particularly beautiful, but it was fun to watch the boats and the people. Chris really wants to go on the Eye, but I’m not too sure I can join him. Heights and myself don’t mix too well.

Westminster was…amazing. Breathtaking. Overwhelming. Unfortunately, we weren’t allowed to take picture inside, but, let me tell you, it was wild. One of the Abbey guides took us on a fantastic tour, hitting on everything from the quire where the choir sits (that’s not a joke,) to the High Altar where St. Edward the Confessor is buried, to the tombs of Queen Elizabeth I and Bloody Mary. Handel’s tomb cracked me up; the man who composed “Messiah” paid money to erect a monument to himself,rather then the Lord he praised. Seemed a little hypocritical. That’s partly why I so appreciated seeing the grave of William Wilberforce. Someone later erected a small monument to him in another part of the Abbey, but his gravesight is nothing more than a simple slab on the floor listing his name and the dates he lived. And even though the monument exists, it praises God. I appreciate that. It’s in tune with my thinking.(On a side note, the Abbey guide told us not to worry about walking on the graves of 3,000+ people. He said they wouldn’t care). I just loved the Abbey. We lit a candle and paused to pray when the Abbey Dean came on over the speakers. We peaked into an old monk’s cell. We saw part of the Chapel of St. Dunstan, incorporated into the original church designed by St. Edward the Confessor; this room is over 1,000 years old. We saw gold, rich jewels, medieval paintings, mosaics…. On and on it went.

Unable to comprehend any more after the tour, we went out onto Whitehall. Saw the Prime Minster’s house, all blocked off from the public. Popped into Trafalgar Square (headed back there later next week.) By that time, breakfast was giving out and we needed a break. Upon grabbing a sandwhich at Gregg’s deli near our hotel (no joke!) we headed out to Kensington Gardens to eat.

Now, you’d think that we’d figure Kensington Palace to be near there. Nah. We just started walking around and literally stumbled upon it. The place is gorgeous! Again, we were awash in history. I loved the displays of clothing, particularly the old dressmaker’s shop set-up and The Last of the Debutantes. Chris was very into the King’s Gallery and the King’s Presence Chamber. To be again surrounded by hundreds of years of artifacts was dumbfounding.

To cap off our Friday, we went down to Picadilly Circus for the aforementioned Les Miserables. I could barely handle the Circus. Such noise! Such a crowd! Thankfully we left the hotel early and managed to get to the theatre with a bit of time to spare. It didn’t occur to me until later that the West End is to London what Broadway is to New York. And what a worthy show it was. The ending brought me to tears, as usually, which means that whoever played Valjean did his job VERY well.

Today the goal was to be more laid-back. We were going to go to the market on Portobello Road, but nixed that idea. Too many people. Instead, we went down to Harrods…also too many people, and too many fancy people at that. I am totally unimpressed with Harrods. Yeah, sure the clothes are pretty to look at, but it’s pompous and overpriced. I did get my mom a little something, but I don’t think I’d ever go back there again.

Chris visited the Doc Marten’s store like he wanted to; couldn’t find anything he liked, surprisingly. So, we just sort of meandered through the city. Stopped at a few shops, but everything’s massively expensive when it comes to clothing. Whiteley’s Centre was more our speed, but even that had issues. It’s so lovely to know now that in European sizes I fall somewhere between Hippo and Elephant. At any rate, we each ended up with a simple sweater and some shoes on sale.

We went back to the hotel and dropped off our few things, and really should have stayed in. Chris really wanted to go to the Hard Rock Cafe, and we debated for a long time about going. Decided to head out; big mistake. We were both tired and starving by the time we got there, and then found that it was a 40 minute wait. Terrible. Beforehand, however, we did walk through Hyde Park, and that was really cool. I loved strolling down the lanes that I’ve read about in every good English historical novel.

Famished, sore and exhausted, we ended up at Pizza Hut. Not very inspired, I know, but Pizza Hut is different over here. We really noticed the difference in portion sizes, and you can get coffee and ice cream. In all reality, we’ve been eating a lot smaller than normal since we left, and it hasn’t killed us. Neither has all the walking. To top it off, traveling appears to screw with my appetite. I’m anticipating coming back a bit slimmer.

Chris and I had a great talk over dinner. We came to the conclusion that we were feeling stressed because we felt a need to have this awesome time every single moment. When that’s not the reality, we wonder what we do wrong. There’s this idea that we need to impress everyone somehow. Well, no more. We didn’t like Harrods. The tube is nice, but it sucks when it’s overcrowded. It’s humid and we wish it were a little cooler.

You know what, that’s okay. We don’t have to like every little bit to have a great time. And we really are having a great time. It’s just nice to be able to admit that we’d like to snitch an hour or two for a nap here and there, instead of feeling like we’ve got to be on the run all the time. We’re doing what we want to do and seeing what we want to see, and that’s all that matters.

Well, anyway, I’ve got to collapse now. Tomorrow is Buckingham Palace…and whatever else we feel like.