Their very special acceptance and love would become a life-changing experience for me. They would remain my primary family throughout my life until this very moment. Living with the McCabes and being welcomed so completely by them also would initiate a major shift in my perspective of my place in the world and my sense of humanity.

In the fall of 1957, nine African-American students enrolled in the all-white Central High School in Little Rock, Arkansas. Melba Pattillo Beals, just fourteen, was among them. Surrounded by an angry mob, the students were denied entry that first day. The hostility and resistance to integration rapidly necessitated intervention by the federal government. Soldiers of the 101st Airborne division were brought in, escorting the nine to and from each class. Yet the violence, the natural child of racism, continued unabated.

Beals was slapped, punched, kicked and even had acid thrown in her eyes. She, along with the others, received death threats. In 1958, Governor Faubus shut down Central High and the other high schools, resulting in a year lost to the Nine and to all the African-American students in the town. Eventually, Beals was forced to relocate to California, with the help of the NAACP, for her own safety. The white McCabe family, Quakers who were active in the Civil Rights movement, opened their arms to this young woman who had experienced little in the way of kindness from white people.

One cannot be an honest student of history and believe that racism never existed, doesn’t exist today or that it was/is “not a big deal.” Nine teenagers wanted the chance for a better education. They chose to put themselves on the line so future generations would not have to suffer the “separate but equal” nonsense. Ignorance and evil exploded in their faces. Why? Because someone, somewhere, long ago decided that the color of their skin made them inferior.

Racism is idiotic and anti-Gospel. Beals makes this clear as she shares bits and pieces of her story. I Will Not Fear is not told in a strictly chronological format, which is really my only complaint about the book, because I love a tidy timeline. She invites the reader to share in her experiences with hatred and violence. There is no hemming or hawing in her words. Black type on white pages force the reader to grapple with the very real evil done to a very young woman.

Throughout, Beals returns to the lessons her Grandmother India taught her:

Are we a faith family or have we given up on trusting God for His protection? Isn’t that the bottom line? When you go, Melba, God will be with you.

That is the bottom line, isn’t it? God is with us wherever we go. He will empower us to do whatever He has called us to do.

This is not a light read, despite the page count coming in at just 200. It took me several weeks to make my way through, because I had to step away and think about what I was learning. We are just 60 years removed from these terrible events. We would be naive to think that “it’s all over” and “everything is fine.” This country has yet to truly come to terms with its past or its present. While nobody needs to take on guilt that isn’t theirs to own, it is important that we listen to the stories. That we take it all in. That we let God expose what needs exposing.

I Will Not Fear is well worth your time.

I RECEIVED A FREE COPY OF THIS BOOK IN EXCHANGE FOR MY FAIR AND HONEST REVIEW.

This was an “I hate everything and pants” sort of week, so I’m glad I got the chance to chat with my online blogging buddies. There is something to be said for a group of diverse people who can come together once a week and lay aside a myriad of differences to encourage each other. We join figurative hands, knowing that we are drawn together by the blood and the love of Christ.

I’m thinking about this especially in light of the Charleston shootings and the subsequent calls across the nation for the removal of the Southern Cross flag from all public displays. My view is that all symbols of the Confederacy should have been outlawed during Reconstruction. They represent a dark time in our national history. A time that should be regarded with soberness and reflection.

This weighs on me a great deal, for the controversy does not divide the nation, but rather exposes the divide already there. The divide that has existed since the first Dutch ship brought the first Africans to this continent. This isn’t about the flags or the statues of Confederate leaders. The flags and the statues aren’t the problem, but the symptom of deeply-held, sinful beliefs and attitudes.

Beliefs and attitudes we may not even know we have.

If Germany can ban the public display of Nazi symbols, surely we can finally do what’s right and ban the public display of Confederate symbols. I cannot help but think that supporting such a band would be a meaningful gesture upon the part of white Christians to our black brothers and sisters. No, it won’t solve the problem. But it would show that we fully and completely understand and acknowledge history. It would communicate that we grasp the power of symbol.

I also think of this in light of my passion to do whatever I can to stand against modern-day slavery. If there were some banner that traffickers rallied to, I would want it shoved in a deep, dark hole and set on fire. Even if it was an innocent piece of cloth to others.

No, nobody alive today experienced or participated in the horrors of Southern slavery, but we are impacted by it every day. Mistrust, suspicion and prejudice run deep on all sides, underneath all skin colors. The Church – made up of people of every shade and hue – must do what we can to show our love for each other. To show that we are eager to remove stumbling blocks out of each other’s way.

Removing Confederate symbols won’t stop racism, but it is one simple, practical and long-overdue step that we can take together.

A step we can take toward the dream of unity.

“To the first-century citizen, the cross was not a beautiful piece of jewelry; it was the lowest form of death and the ultimate in humiliation. The proper Roman citizen would never mention the cross in polite conversation. It stood for rejection and shame.” – Warren Wiersbe, Be Free: Galatians, 155.

If anyone ever had the right to walk the earth with a strut, it is Jesus. After all, He made it.

Yet from His first, squalling baby-cry to His last gasping breath on the cross, Jesus exemplified humility. He came here and lived as and among the lowest. He chose to identify with shepherds and carpenters, peasant girls and widows. He did not have the finest clothes to wear or the best food to eat. He didn’t have a place to call His own.

His parents couldn’t put Him in a snug little bed that night so long ago. They laid Him in a feeding trough. Rough hay rustled with the smallest of His movements.

Jesus suffered. He lived as one hounded and oppressed from His first day of life to His last. The carpenter’s Son lived in a backwater. He never had money to spare. He felt the weight of religious legalism and the weight of political chaos. A king tried to kill Him in Bethlehem and a king would conspire to kill Him in Jerusalem – and succeed.

It’s no wonder that the world-at-large is okay with faith so long as it’s not faith in Jesus. Unbridled tension gallops through the story of His life. A King who served? A Savior who bled? God in flesh? Tremble at the implications. Jesus is confrontational. He gets up in your business and there are only two ways to respond: Love Him or hate Him. There is no such thing as indifference toward the Man from Galilee, for indifference is only the sly form of hate.

The infinitely wealthy Lord of all, in a manger.

The King of Kings, on the cross. 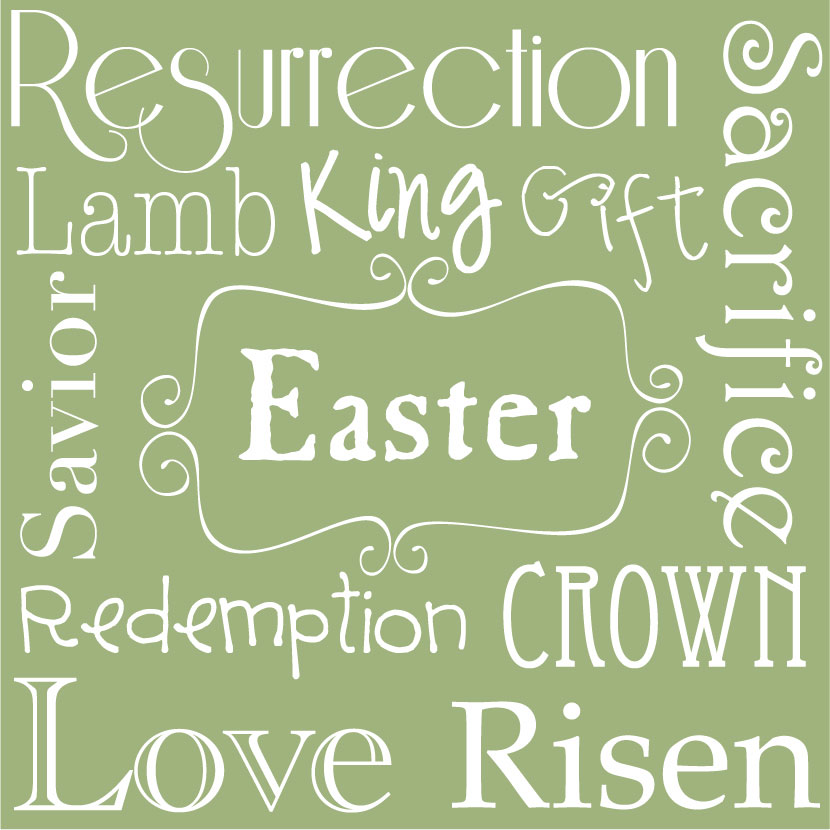 After the horrible betrayal. After the mocking trials. After the bruises, the wounds, the spitting, the torture. After the crown of thorns. After the agony of the Cross. After it was finished. After the dreadful silence of the tomb.

I say that with all seriousness. If there is ever a day when Christians should celebrate with abandon, Easter is it. Jesus is alive! The Evil One is defeated! Death couldn’t claim Him! The grave couldn’t hold Him! He is wrapped not in moldy, decaying funeral rags, but in a glorified, perfect body. And yet a body that still bears the marks. Our names carved upon His hands.

God became flesh and made His dwelling among us.

I’ve said it before and I’ll say it again: I don’t understand how people live without Jesus. Looking at the state of the world, from wars to human trafficking to poverty to hunger, makes me cling to Him all the more. I am desperate for what only God can provide. On my own, I say and do stupid, stupid things. Selfish things. Mean things.

I am a sinner.

I need a miracle.

Jesus’ resurrection is that miracle. He takes all that ugliness, all that sin, and washes it in His blood. He sends His Spirit to live in me and make me into the person I was meant to be. No amount of self-help or positive thinking can do what He does. He pokes and prods at all the deep, secret, dark places. He brings things to the surface, things I want to keep buried, and teaches me how to look at them in His light. He teaches me how to walk the right path. He teaches me how to worship Him as the True and Forever Lord.

He teaches me how to be real.

And God? He’s the complete real deal. He is totally honest, totally Himself. He doesn’t have a messed-up side. He doesn’t try to manipulate or guilt-trip anyone. He just lays out the facts. He says, “This is Who I Am and this is how it is.” Then He lets us decide. Empty or whole. Heaven or Hell. New or old. Together or alone.

When Jesus left the tomb that glorious morning, the way was made clear for each of us. The great enemies of sin and death were slain by the only One Who could do it. We don’t have to live in the pit. We can cry out, “Jesus, save me!” And He will. He’ll reach in and pull us out. And we see the Great King with eyes that blaze with the fire of holiness. We are bathed in the beauty of His love and the fantastic mystery of mercy. Draped in the robes of His righteousness, we realize how small and shriveled we are, and how glowing and healthy we can become in Him. Because of Him.

We approach the Throne of the Holy One, welcomed as His beloved children.