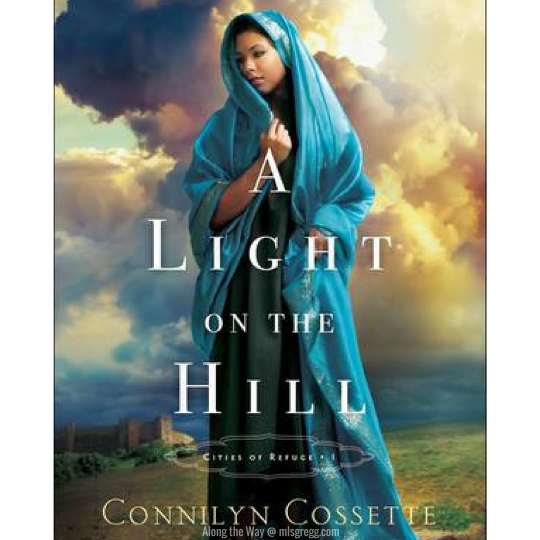 Then the Lord spoke to Joshua, “Tell the Israelites: Select your cities of refuge, as I instructed you through Moses, so that a person who kills someone unintentionally or accidentally may flee there. These will be your refuge from the avenger of blood. When someone flees to one of these cities, stands at the entrance of the city gate, and states his case before[a] the elders of that city, they are to bring him into the city and give him a place to live among them. And if the avenger of blood pursues him, they must not hand the one who committed manslaughter over to him, for he killed his neighbor accidentally and did not hate him beforehand. He is to stay in that city until he stands trial before the assembly and until the death of the high priest serving at that time. Then the one who committed manslaughter may return home to his own city from which he fled.”

I like stories that make me think. A Light on the Hill, by Connilyn Cossette, is one such story. Set just prior to the death of Joshua, when the Conquest of the Promised Land was still happening, Cossette tells the story of Moriyah, a woman who experienced great trauma as a captive in the city of Jericho. (Note: The opening chapters contain bits that allude to a previous novel, Wings of the Wind, but it not necessary to have read that in order to follow the plot). This trauma has resulted in what we would recognize today as PTSD; Moriyah has flashbacks, triggered by certain sounds and smells, and does her best to keep out of everyone’s way.

Moriyah’s life begins to spin out of control one night when she dares to take part in a festival at Shiloh. All of the women present are veiled (a key part of her story), which empowers her bold act of joining in a dance. She catches the eye of a soldier named Darek. The attraction is mutual, though Moriyah has just learned that her father has arranged a marriage for her.

To our eyes, an arranged marriage seems horrific, but women did have some agency. Moriyah knows that she could object and that her father wouldn’t make her go through with it. Due to her time in Jericho, however, she believes that it’s best for her to, essentially, take what she can get. She knows that her father is seeking to protect and provide for her out of true kindness. Despite a (chaste) evening spent with this soldier, she chooses to square her shoulders and attempt to get the best out of the situation.

She is forced to run.

A Light on the Hill has all the elements of a conventional, gentle romance, but it’s so much more than that. I kept turning the pages because the story was so fascinating to me. Cossette obviously put a lot of time and effort into researching source material, both the Scriptures and scholarly tomes. The reader genuinely feels transported to another time and place, rich with foreign sounds and customs. It was especially interesting to me to learn that the language barrier between the Israelites and Canaanites was not insurmountable, an element that is integral to a good third of the novel.

This book occupies that wonderful space that all good historical novels fall into: a great story and the reader learns something. While the ending isn’t exactly a surprise, I didn’t mind that at all because I had such a good time getting there. Definitely recommend this one, particularly for fans of Mesu Andrews and Francine Rivers.

I RECEIVED A FREE COPY OF THIS BOOK IN EXCHANGE FOR MY FAIR AND HONEST REVIEW.

2 thoughts on “Review: A Light on the Hill”